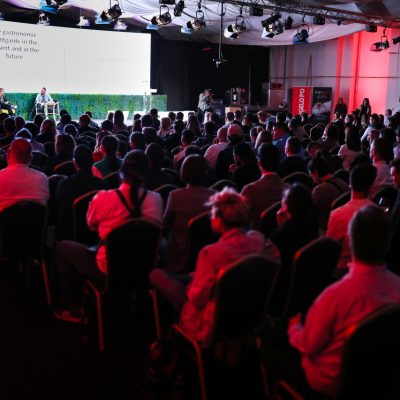 The end of the Weekend Food Festival program was undoubtedly one of the main motives for the arrival of most visitors. The line-up of the best of the best not only justified, but also exceeded all expectations. The two greatest hits were the biggest stars of the festival, chef Massimo Bottura, owner of Osteria Francescana—twice named the best restaurant in the world according to The World’s 50 Best Restaurants—and Dabiz Muñoz, best chef in 2021 by Best Chef Awards and owner of DiverXO—the first and only restaurant in Madrid with three Michelin stars. Apart from the fact that their performances completely filled and revived the biggest hall of the festival, both chefs were greeted with raucous ovations, which also wrapped up the biggest gastronomic event of the year in the best possible way.

One of the greats of the industry, Bottura is an award-winning chef and owner of several restaurants—including the world-famous Osteria Francescana with three Michelin stars. In an inspiring 1-on-1 conversation with the director of the Weekend Food Festival program Hrvoje Petrić, he revealed what it is like to run a restaurant empire, while also offering some advice for young chefs. “No more excuses. I even had it tattooed on my arm. We have a great responsibility and we have to do something about it. The world needs us. Don’t forget where you come from and who you are, because diversity and culture are important,” said Bottura. He pointed out that the world of gastronomy was moving towards a sustainable future—a concept that may seem new, but is actually based on a return to the past.

His predecessor on the festival’s biggest stage, Dabiz Muñoz, intrigued the audience with a special introductory video, but also with a story about the culinary avant-garde, showing why he was named the world’s best chef in 2021. “There are different rules for creativity, but above all you need to be brave and ready to make mistakes. That is creativity—to make a hundred mistakes but to continue in your desire to walk the untrodden path and create something new. That is the avant-garde,” said Muñoz, underlining that the true avant-garde begins with an unwavering commitment to one’s vision. He concluded his extremely impressive performance with a small sneak peak of his latest restaurant RavioXO, which has yet to see the light of day in Madrid, and thus honored everyone with an exclusive.

And when it comes to intriguing performances, we should definitely mention “Translating flavors” by Mexican chef Santiago Lastra, owner of the restaurant KOL and the holder of a Michelin star. This richly awarded chef dedicated his performance to answering the question of how to translate taste. With a dynamic demonstration he attracted many interested spectators to the stage, who had the opportunity to witness first-hand some true culinary magic.

Ana Omazić, pastry chef at the sensational Danish restaurant Alchemist, Maša Salopek, the best pastry chef in the world and the head pastry chef at Hiša Franko—the well-known restaurant with its even more famous chef, Ana Roš—and Ljupka Gojić Mikić, owner of the Jolie Petite pastry shop, featured on the panel “Icing on the cake”. Under the moderation of Tea Mamut, they talked about how they are living proof that dreams can come true and miracles do happen, and that only the sky is the limit for those who are persistent, hardworking and dedicated.

What is the secret to the success of the fantastic Istrian olive growers, how difficult is it to produce quality olive oil—especially one that will compete with the best in the world—and what is the basis of Istria’s reputation as a top gastronomic region for olive oil? These and other questions were discussed by Maria Paola Gabusi, president of the O’Live & Italy Cultural Association; Tedi Chiavalon, olive oil producer from Vodnjan; and Denis Ivošević, director of the Istrian County Tourist Board, at the panel “Why Istria is the best olive growing region in the world,” moderated by Irina Ban, expert for strategic communications and branding professional. The panelists agreed with the conclusion that the key to Istria’s continued success lies in the cooperation of the manufacturing, business and scientific sectors and that the desired results cannot be achieved without a common goal pursued by all key actors. Thus, the success story of Istrian olive growers is a very commendable story about the synergy of the whole community of local producers, united in the desire to present to the world the true charms of their gastronomic heritage. In addition to top quality olive oils, Istria stands out for its excellent wines. The best of them were presented at the Best of Vinistra 2022 competition at the Weekend Food Festival, along with the winning selection of fresh and mature Malvasia, Teran and Refosco.

In addition to numerous panels, lectures, masterclasses and gala dinners, at this year’s Weekend Food Festival, the FoodTech Start Up Competition was presented. A competition open to all start-ups and designed to find new and creative ideas and support the growing hopes of the food and hospitality industry.