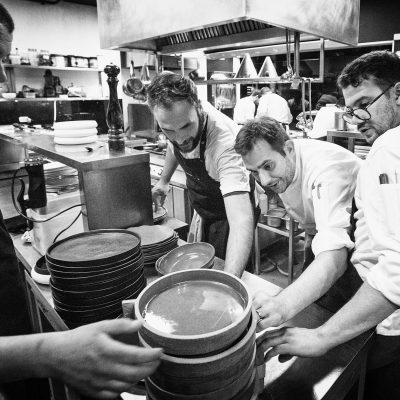 How was the first edition of a great festival that celebrates gastronomy?

A Unique Gastronomic Story at the Glyptotheque Gathered Over 15,000 Gourmets!

Over the course of four beautiful days, over 15,000 people enjoyed more than 30 panel discussions, 10 masterclasses featuring top chefs and coffee experts. Just for this occasion, Zagreb-based restaurants designed menus for this event, so visitors could enjoy the Hanami Team’s ramen or sushi, the juicy porchetta from Bistro apetit by Marin Rendić, the Bread club focaccia and Mason and Submarine burgers, Roguemarin’s and Meat the King’s dishes and many more delicious delicacies.

Interesting panel discussions raised a number of questions like how a Croatian product can enhance Croatian tourism, what should guide you while creating of gastrostrategies, is Teran the new Malvasia, and what are the latest trends in the cocktail world. One of the most provocative panels was definitely “How to Go On in These Conditions”, which was discussed by Marin Medak as a representative of the Independent Caterers Association, Veljko Ostojić of the Croatian Tourism Association, and Boris Šuljić, owner of Boškinac Winery, Hotel and Restaurant while the panel was moderated by Petar Štefanić .

We talked to the best pastry chefs, peeked into their worlds, hosted the best Croatian chefs and analyzed the topic of modern Croatian gastronomy, as well as got to know young and talented chefs better, namely Marko Turković (Mano2), Deni Perko (Lemongarden), Jurica Jantolek (Bistro Pod zidom) and Matija Jagić (Brokenships Bistro). Let’s not forget to say that the bread panel which was hosted by Hrvoje Petrić – also the Festival Director and a great connoisseur and fan of starters – was also joined by Nataša Đurić from Hiša Franko, the internet sensation Anita Šumer and Karlo Vulin from the famous Bread club bakery in Zagreb.

The masterclasses are a story unto themselves. Scott Rao, hailed a genius in the coffee world, and Saša Šestić, who is also the world champion in the barista competition, was particularly delighted.

“I am extremely pleased to be a part of this story. The people are very cordial, friendly, knowledge-sharing is encouraged, and I am very pleased!” stated Scott Rao.

Zagreb Coffee Weekend offered visitors a chance to taste some truly special coffee blends that they may not have had the opportunity to drink and showcase some innovations from the coffee world.

“What is important for us is to set trends, and not to follow them, and it is really easy to follow the global trends, and very difficult to set our own, and our mission and vision is to do just that!” said famous chef Mate Janković.

In addition, the Festival featured a unique Brewery lane that was irresistibly reminiscent of the streets of London except that it was filled with craft beers from some of Croatia’s best breweries, such as Nova Runda, Varionica, Tap B, Pulfer, Primarius, Positive Brewery, Pivionica Mlinarica, Medvedgrad and Garden Brewery.

For those who may prefer a wine entourage, there are well-known labels from Croatian winemakers such as Agris, Roxanich, Fakin, Meneghetti, Griffin, Kopjar, Miva, Feravino, Petrač, Vino Bora and Badel.

One of the highlights is certainly the Michelin honors awards ceremony. The award ceremony took place on Friday May 24th, 2019. at the Kaptol Boutique Cinema Hall, and it was hosted by renowned actor and director Janko Popović – Volarić. At one point, over 40 representatives of the truly best restaurants in the country were present on the stage. We should also remind you that on the last day of February, two more restaurants were awarded Michelin stars – Zagreb’s Noel and Kvarner’s Draga di Lovrana. Restaurant 360, Monte and Pelegrini confirmed their stars from last year, while the BIB Gourmand designations were awarded to Agava (Zagreb), Batelina (Banjole), Dunav (Ilok), Konoba Fetivi (Split), Konoba Mate (Korčula), Tač (Zagreb) and Vuglec Breg (Krapina).

Beautiful sunny days, warm May evenings, marvellous cocktails by Marin Nekić and a great music program spiced up the Festival and coupled with a rich educational program, attracted over 15,000 visitors. In addition to the local guests, the foreign media was also interested in the festival, and they were also full of positive impressions, especially regarding the local specialities. In addition, they got to know the Zagreb scene better by visiting the Plešivica winemakers, since the area is often referred to as the “Little Champagne“.

“Our gastronomic story is different, and I am glad that people have recognized it, we are already designing new features for next year’s event and we are delighted that our project was recognized as very valuable. We want excellence in every segment, and we will not deviate from this,” concluded Boris Kovaček, and Tomo Ricov agreed with the positive impressions. “I am very pleased, things are beyond my expectations, and next year will be a real regional event,” said Tomo Ricov.