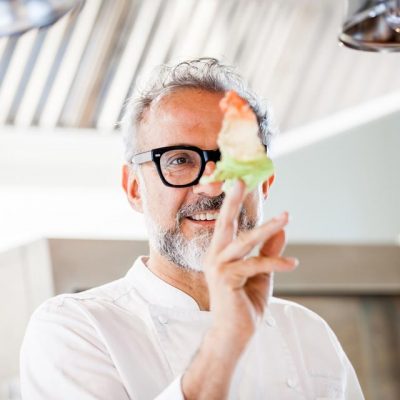 From 5-8 May, Rovinj will become the center of world gastronomy, as confirmed by the numerous names announced at a press conference at the Sol restaurant. During the four days of the Weekend Food Festival, which will bring together the very best from the global and domestic food and wine scenes, as well as all lovers of gastronomy, the world's most famous chefs will share their knowledge with all festival visitors.

One of the world’s most famous chefs attending the Weekend Food Festival is certainly the great Massimo Bottura. The legendary chef whose restaurant Osteria Francescana carries three Michelin stars and was even twice named the best restaurant in the world according to the World’s 50 Best restaurant list (2016 and 2018). Massimo Bottura is a chef who creates new culinary trends and directly influences the world gastronomic scene. Today, in addition to leading several successful restaurant projects in Italy and abroad, he stands out as an exceptional humanitarian who tirelessly initiates new projects to help those in need.

Bottura has fond memories of Croatia back in 1984, when he traveled our coast on a motorbike, stayed with local people and caught and prepared fresh fish. As he himself says in the video inviting you all to Rovinj, he is looking forward to participating and sharing his visions at the Weekend Food Festival.

Dabiz Munoz, the best chef in the world in 2021 according to the Best Chef Awards, is also coming to Rovinj. Munoz is the owner and chef of two restaurants, StreetXO and DiverXO, which proudly carry three Michelin stars. This young and extravagant chef delights with his innovative concepts and attracts people who are ready to experiment and try new culinary sensations.

In addition to Dabiz, Rasmus Munk will be a guest at the festival, who in his Alchemist restaurant completes the menu of almost 50 edible impressions with art installations, projections and music, thus realizing his dream of “holistic cuisine”. Arguably the most famous chef from our region, Ana Roš, the best chef in the world in 2017, is also coming to the Weekend Food Festival. With her inspired creations, she brought Slovenia’s Hiša Franko to the 21st place on the prestigious restaurant list of the World’s 50 Best and is the holder of two Michelin stars.

Vegetarian cuisine continues to take an even greater place of prominence on the world gastronomic scene. Well-known Austrian chef with Croatian roots Paul Ivić, has achieved tremendous success with his two vegetarian restaurants, Tian in Vienna and Tian in Munich, which carry one Michelin star each.

From the restaurant Venissa on the island of Mazzorbo in the Lagoon of Venice, comes Chiara Pavan, the best Italian chef in 2018. Also arriving in Rovinj is Brazilian culinary icon Janaín Rueda, who in 2020 was awarded for outstanding contribution to the hospitality industry and initiating positive change in her community.

“We are extremely glad that we managed to gather the best of the best in Rovinj for four days of educational and extravagant socializing. Some have already been to Croatia, and for others this will be their first visit, so we are happy to be their hosts and show them Istria, but also other regions,” said Hrvoje Petrić, program director.

In addition to these chefs, some of whom will present their unique dishes at gala dinners in the restaurants of the Maistra Collection of hotels, the Weekend Food Festival will be attended by numerous domestic and foreign panelists who will discuss topics such as media importance and the role of women in gastronomy, contemporary culinary trends, the importance of the team in kitchens, excellent service, as well as local topics such as olive growing, winemaking and fish in the Adriatic Sea.

“Apart from world-famous chefs, the audience will have the opportunity to encounter and taste top local and foreign wines, sample local products and socialize with industry leaders. What we have managed to do for the communication industry at the Weekend Media Festival, which is connecting, socializing and entertaining, we also guarantee for the largest culinary event in the region,” added Boris Kovaček, director of the Weekend food festival.

In the old tobacco factory, where the Weekend Media Festival is held, these four days in May will be dedicated panels, masterclasses, workshops and gala dinners featuring the world’s best chefs, whose restaurants have several Michelin stars.

“We are very pleased to be the host and partner for such an important event as the Weekend Food Festival, which will bring to Rovinj many renowned names from the world gastronomic scene. In building a complete tourist product at any destination, the role of top quality food and wine is extremely important, insofar as the development of one without the other is almost unthinkable. As one of the leading Croatian tourist companies, Maistra is committed to the constant development of this segment of the offer, especially when it comes to the restaurants that are part of the Maistra Collection hotels. Among them are, for example, restaurants Cap Aureo, Agli Amici, Wine Vault, Adriatic Brasserie, Tekka by Lone and others. In this way, we contribute not only to the enrichment of the overall tourist offer and the extension of the season, but also motivate people to travel and stay in the destination. The upcoming festival will certainly attract a large local audience, but also guests for whom this will be the main motive for coming to Rovinj,” said Luka Ravnikar, director of sales and marketing of Maistra.

The Weekend Food Festival is a unique opportunity for all professionals, caterers, winemakers, oenologists, olive growers, enogastro experts, and foodies for personal and professional development, as well as for exchanging ideas and opening some new horizons and business opportunities. The best chefs and waiters from Maistra’s Food & Beverage Bootcamp will also participate, which will take place just before the festival. Those who are interested can still apply.