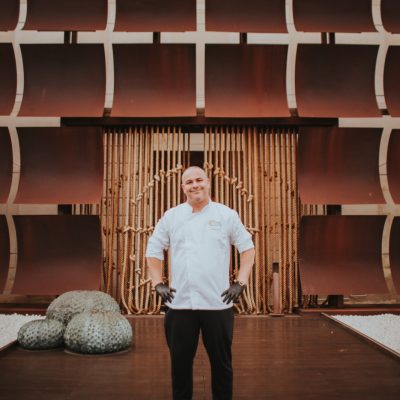 Chef Ángel León of Aponiente, the only 3 Michelin Star restaurant in Spain that has collaborated with the NGO World Central Kitchen

• The “Chef of the Sea” joined the #ChefsForSpain solidarity initiative launched by Chef José Andrés' NGO to help combat the COVID-19 crisis in Spain.

• About 10.000 meals have been made at the Aponiente restaurant during the last month, integrating the highest quality ingredients with necessary nutritional value, ensuring a healthy and well- balanced diet.

• The objective has been to help the most vulnerable families and those at risk of social exclusion by ensuring them a plate of food a day.

Chef Ángel León’s concern for responding to and helping to alleviate the COVID-19 health crisis that is currently occurring drove him to step forward and joined the #ChefsForSpain culinary solidarity movement that Chef José Andrés’ NGO World Central Kitchen started weeks ago in Spain. 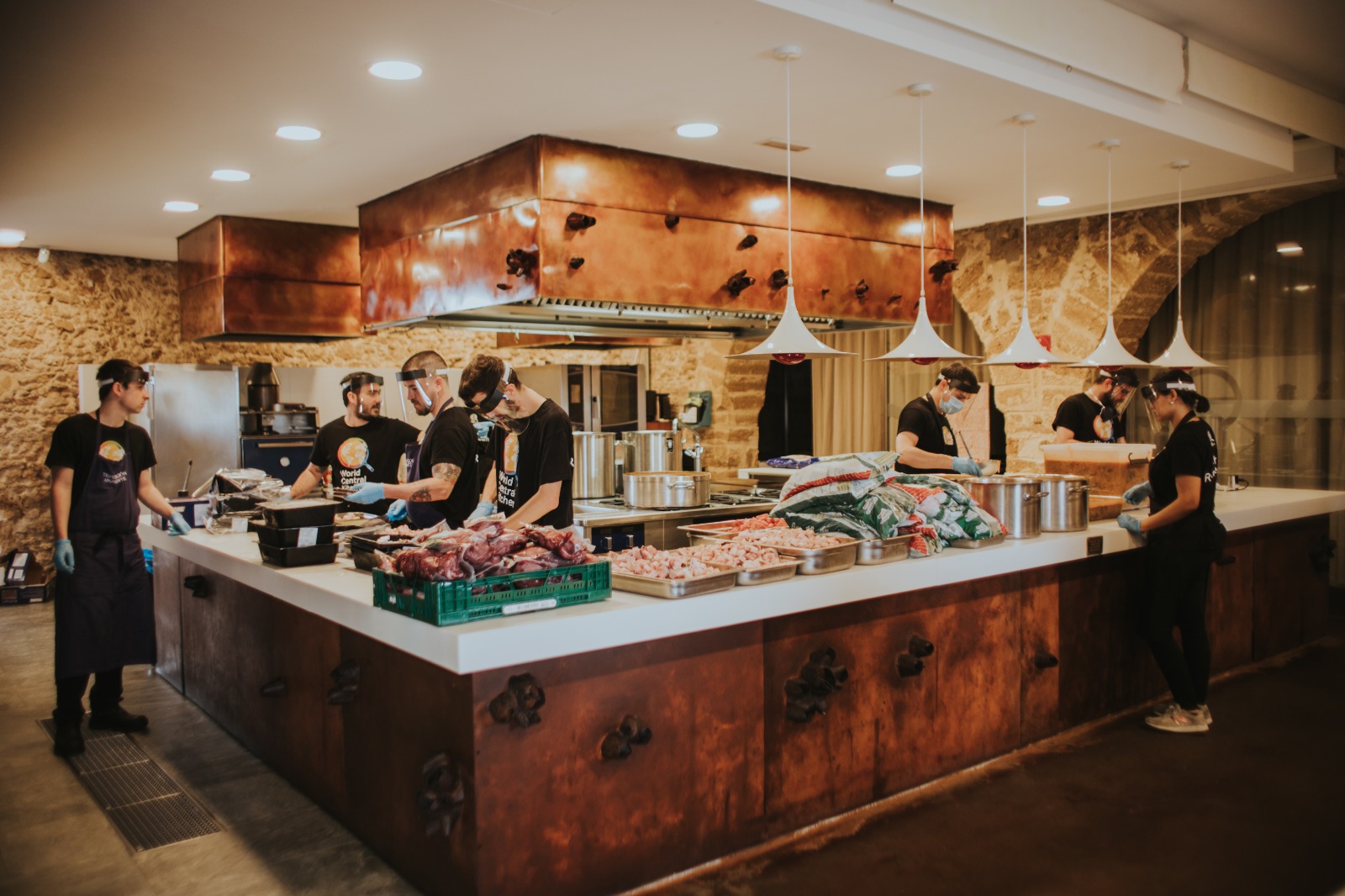 Aponiente thus became the first and only 3*** Michelin Star restaurant in Spain (# 94 The World 50 Best Restaurants) to collaborate on this project and second in the world, after French chef Eric Ripert’s restaurant Le Bernardin. About 10.000 meals have been made in total by Aponiente during the last month.

“It was an obligation for us to direct our work towards the service of a cause that helps hundreds of families here in Cádiz by providing a plate of food at home. These are moments when awards, medals and prizes are set aside, and the important thing is to act quickly and together, to maintain the ship afloat and prevent many people in our community from sinking or drifting away in a critical moment”, chef Ángel León assures. 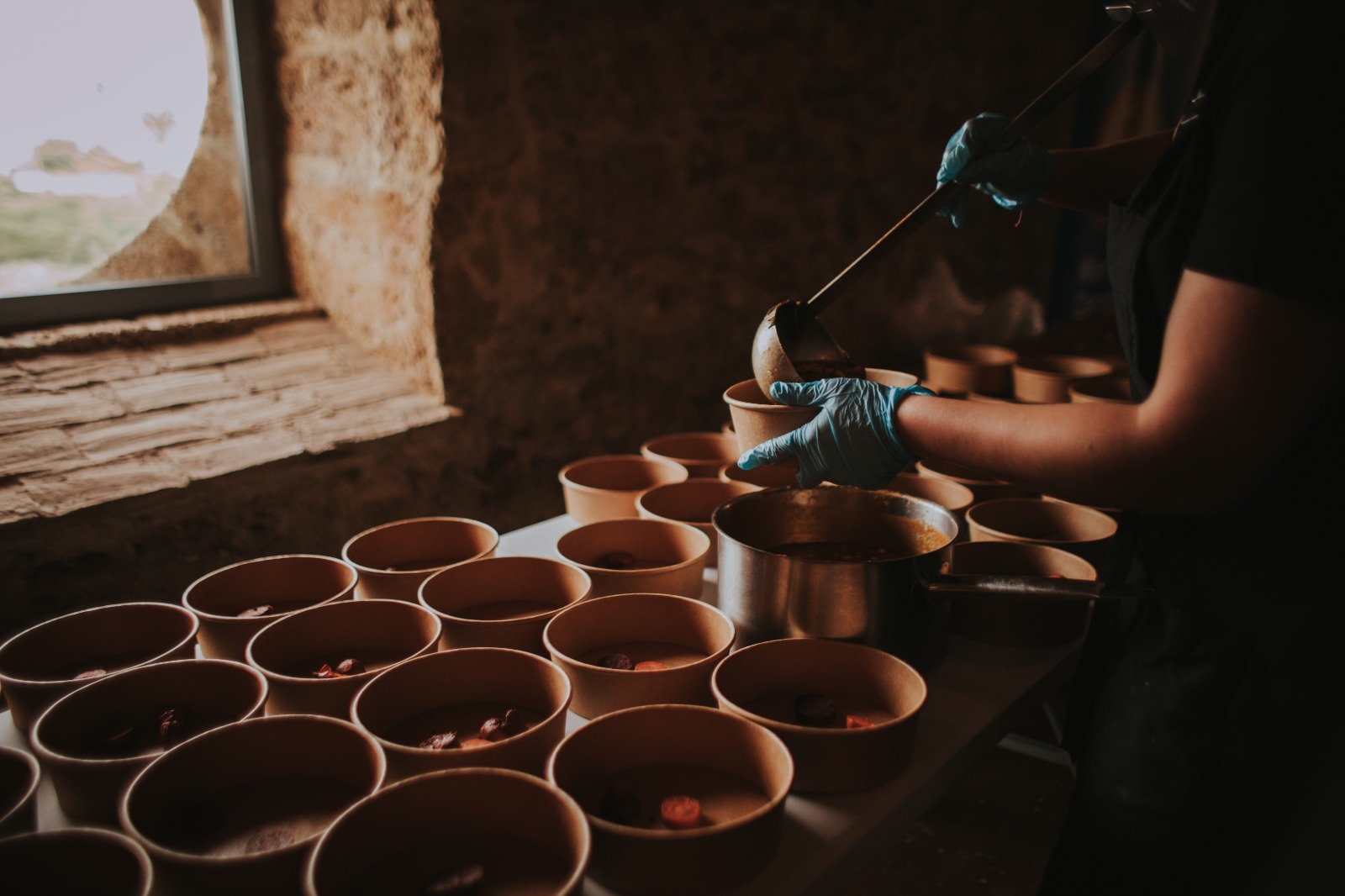 Aponiente has always worked not only to contribute on a culinary level but also a social one, given that Cádiz is one of the areas with the highest unemployment rate in Spain and Europe and with one of the most fragile economic frameworks. They are committed to people and helping to revitalize the social structure, doing so by employing vulnerable family members. However, they are also dedicated to protecting the environment and nature. Located in the 19th Century tidal mill, the Aponiente team carries out important work, helping to mend their environmental surroundings, such as the ​​estuaries and salt flats that surround the restaurant. 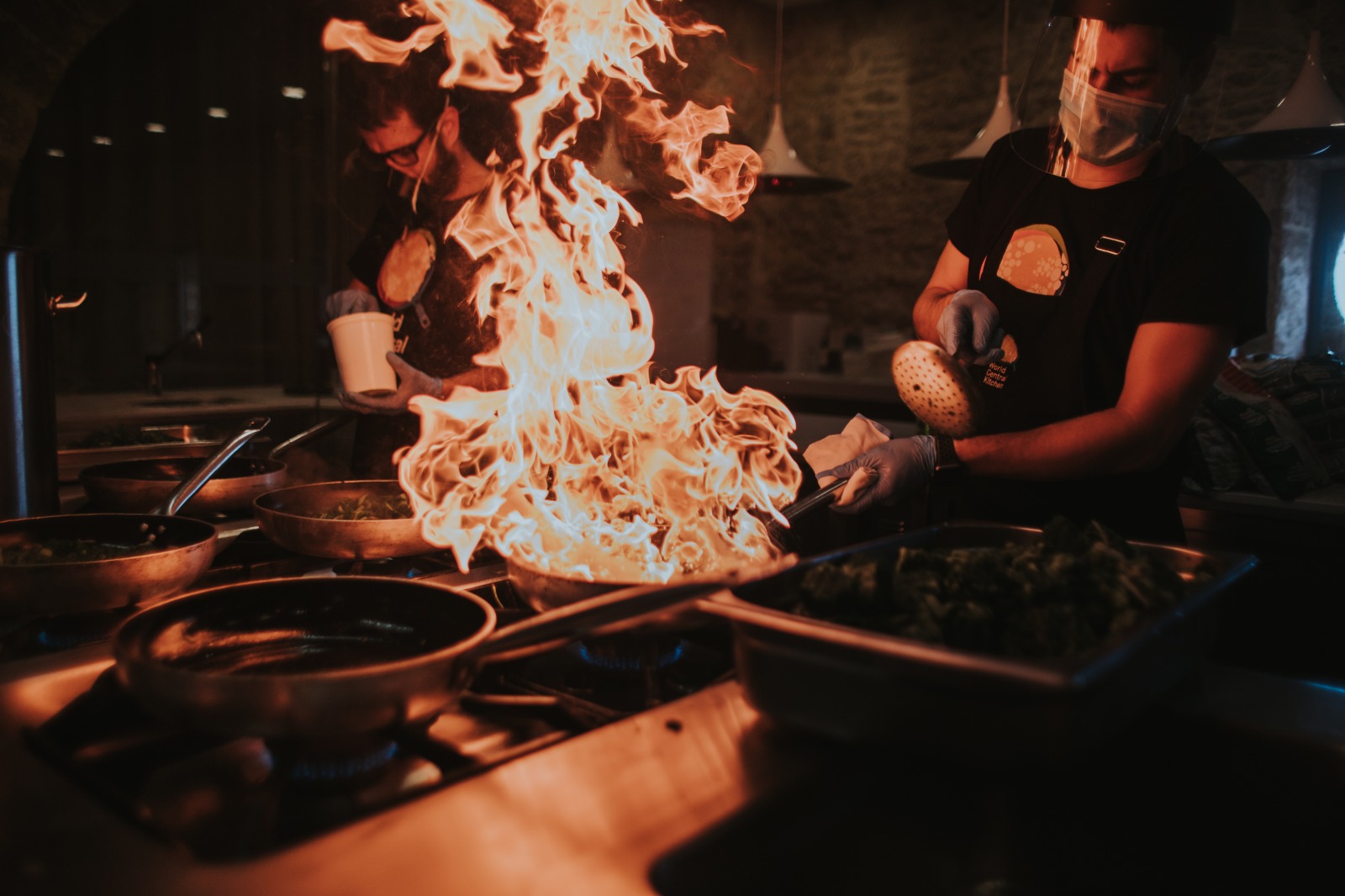 With a team made up of dozens of volunteers, the stoves at Aponiente were lit every day to help nearly 400 vulnerable and at-risk families in Cádiz (Andalusia). This could have not been possible without the collaboration of an ex-former Aponiente´s team member, chef Juanlu Fernández that currently leads the Lú, Cocina y Alma restaurant that has been working with chef Ángel León since the beginning of the project side by side with both kitchen teams. All of the meals cooked have been distributed door-to-door with help from the Red Cross organization. 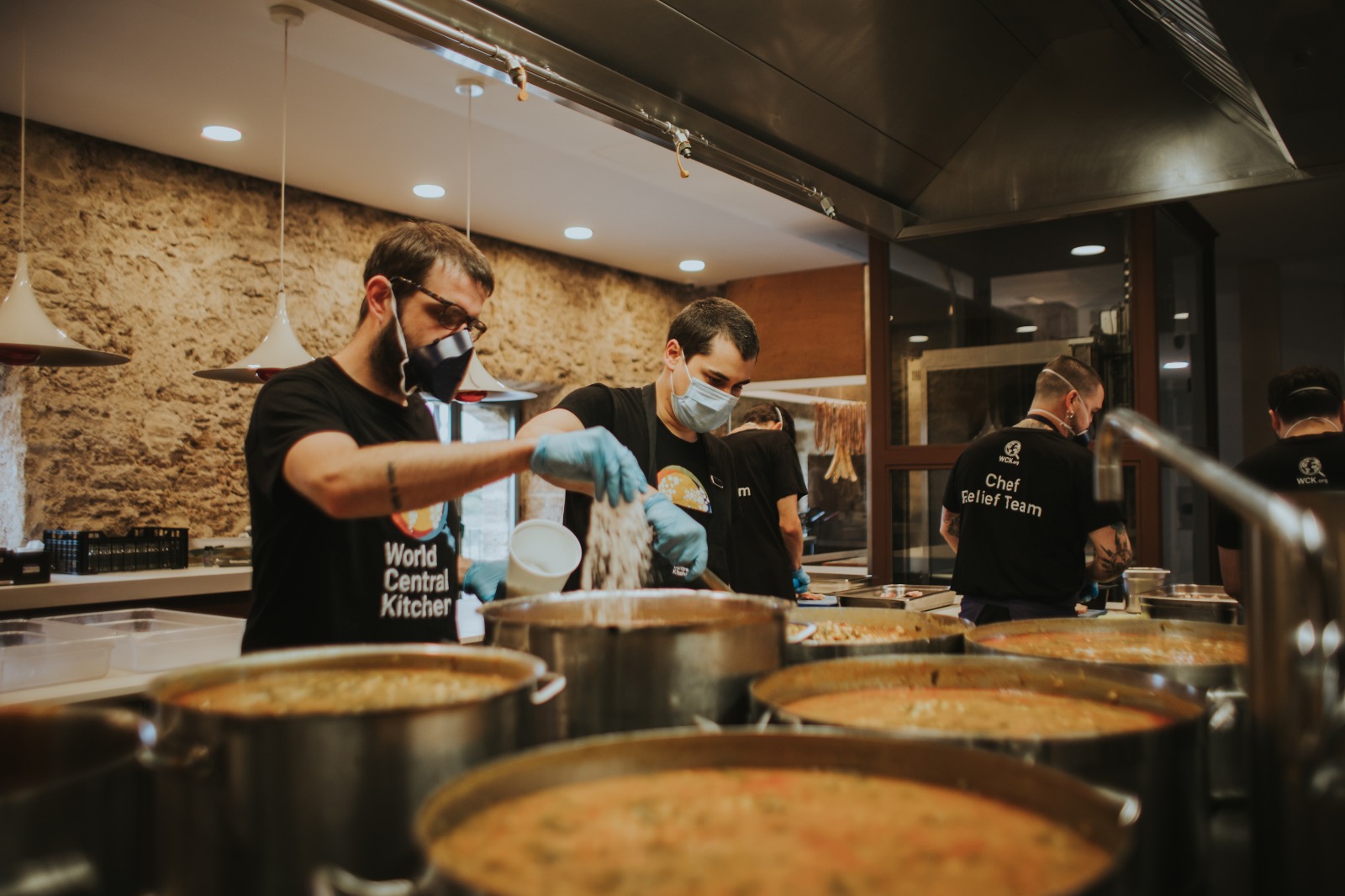 During the preparation of the dishes, different types of quality ingredients were integrated in order to ensure a healthy and balanced diet for all those being helped. In addition, all of the ingredients were donated by distinct organizations, companies and even local producers who ensure tasty dishes which, of course, always contain some element connected to the sea, which is the signature mark of Chef Ángel León. 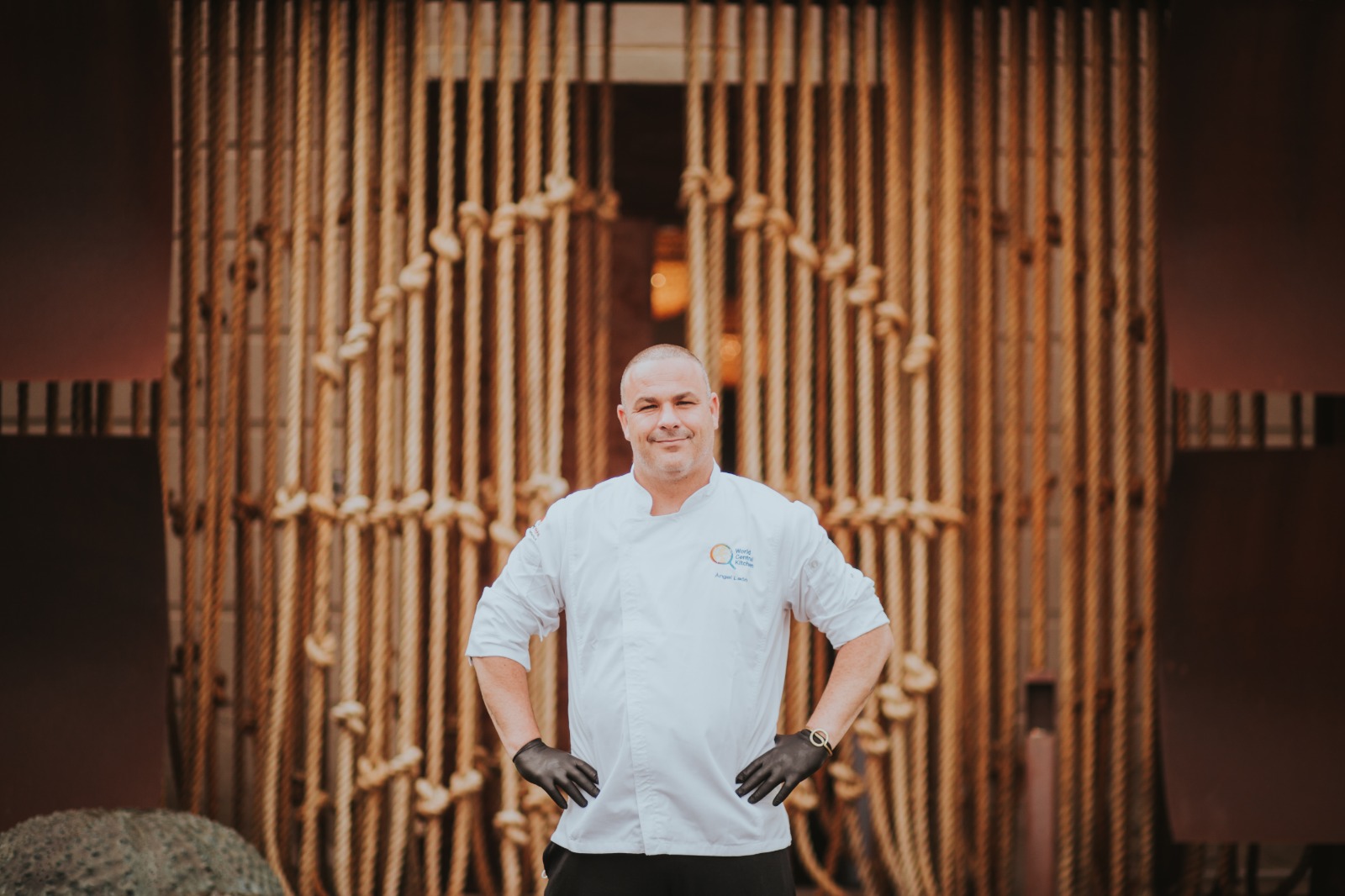 For more than a decade, he has been working tirelessly to investigate the vast pantry of the sea and discover new products, due to the fact that people currently only use 20% of what is fished from seas and oceans, 80% of which is discarded.

Therefore, the Cádiz chef works to bring products that have been undervalued back to life by reinventing and recycling them. Creativity, innovation and taking advantage of the sea in its purest form are all pillars of Aponiente’s cuisine, which, in these complicated days, has moved into to the homes of Cádiz’s most vulnerable residents.

But WCK doesn’t just work in this city, given that Spain is one of the countries that has been hit the hardest by the international health crisis. There have been 13 solidarity kitchens located throughout the country, some of them are still working in those areas more affected by the covid-19, that have lit their stoves to collaborate with Chef José Andrés’ NGO. Cities such as Madrid, Valencia, Barcelona, ​​Seville, Marbella, Huelva, A Coruña, etc. have been distributing a total of more than 20,000 daily portions of food throughout the territory. 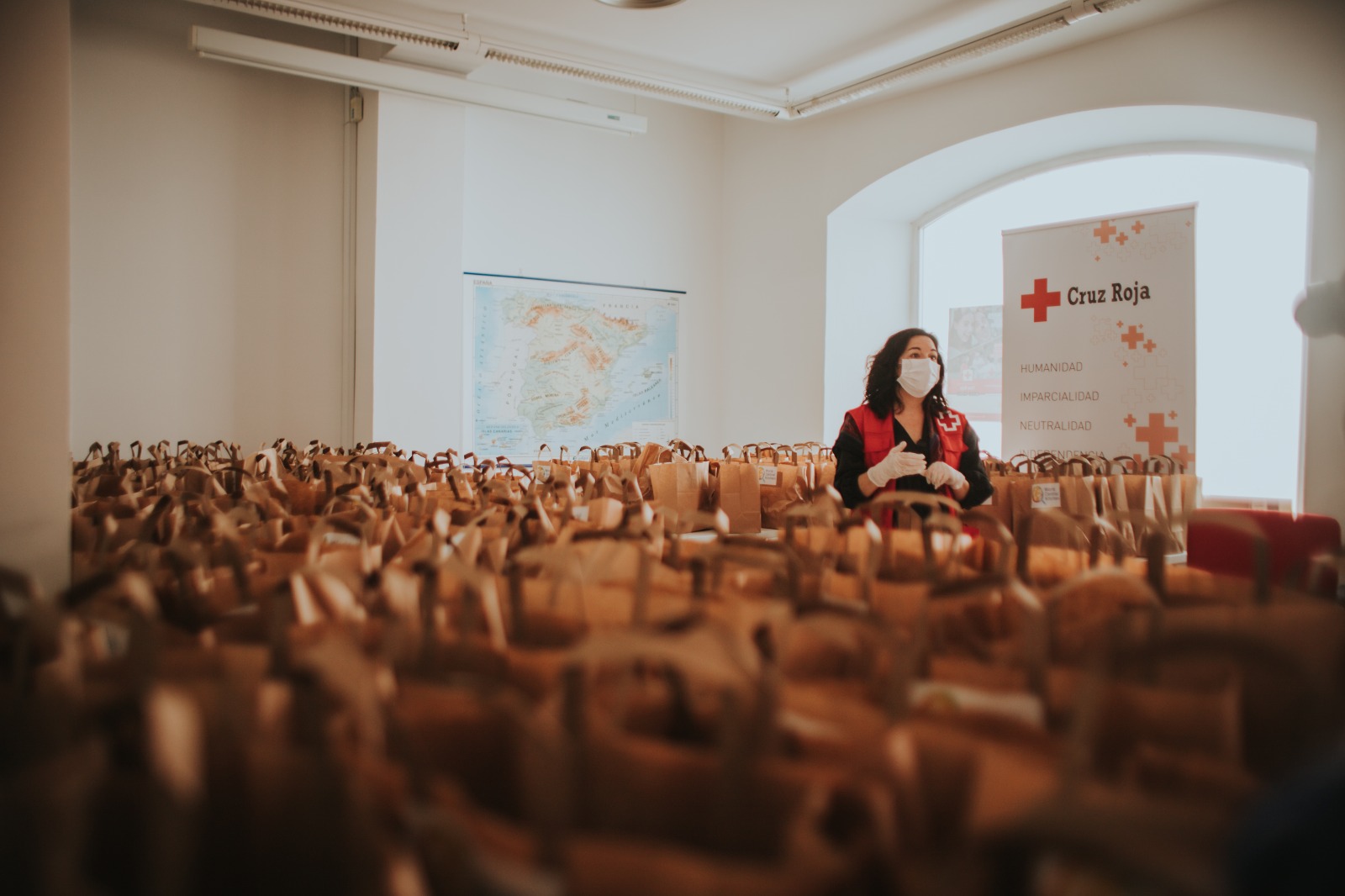 All of these are cities that have suffered and continue to do so, the worst consequences of the crisis, a crisis that is still present throughout the country which is still fighting against, together from the culinary sector and the world of haute cuisine too.

The Aponiente restaurant is located in an old tidal mill from the 19th century. In the heart of the Bahía de Cádiz Natural Park in El Puerto de Santa María, the area is inhabited by marine life that is subject to constant changes, given the local climatic conditions and the rhythm of the tides. Captained by chef Ángel León, Aponiente is at the forefront of efforts to recover its surrounding ecosystem to its original state of the environment while also creating an ecosystem for future generations.

Regarding sustainability, Aponiente prioritizes protecting the environment through sustainable gastronomic practices. Sustainable fishing, innovation, creativity, honesty and the use of uncommon species, which have been historically discarded, are the pillars of the gastronomic philosophy of the “chef of the Sea”. Ángel is truly a genius in the field of gastronomy whose commitment to nature has led him to discover, use, reinvent, and revolutionize food from the great pantry of the sea.

About World Central Kitchen in Spain and Worldwide

World Central Kitchen has already responded to the COVID-19 threat in more than 20 cities in the US and many others around the world. This has allowed them to gain experience in how to produce and distribute meals to those most in need in a safe and efficient environment, also taking into account WCK’s experience in responding to situations of food shortages after natural disasters such as hurricanes, earthquakes, volcanoes, sunamis, etc.

Currently in Spain there are 13 solidarity kitchens working voluntarily under the motto #ChefsForSpain. A gastronomic social movement that combats the coronavirus crisis by distributing more than 20,000 daily rations of food for the most vulnerable families in the country. An initiative in which it is counting on chefs and other people in the hospitality sector as food suppliers. Chef José Andrés continues to fight in his country with the aim of helping by guaranteeing a plate of food for all those most affected by an unprecedented global crisis.
World Central Kitchen is an NGO that is financed with funds and private donations.

About World Central Kitchen
Founded in 2010 by chef José Andrés, World Central Kitchen (WCK) uses the power of food to strengthen communities in times of crisis and beyond. WCK has transformed the field of disaster response to help devastated communities recover and build resilient food systems. Since its founding, WCK has served more than 15 million meals to people affected by natural disasters and other crises worldwide in countries such as Albania, Bahamas, Colombia, Guatemala, Haiti, Mexico, Mozambique, Venezuela, and the United States.